Autumn On The EB

Leisenring And Hidy And The Flymph Patterns

"I differentiate between fishermen and anglers. All anglers are fishermen but not all fishermen are anglers. The fishermen hopes to catch fish while the angler seeks an intangible catch"O.W. Smith 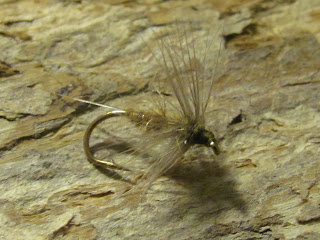 The flymph can be considered the American Soft Hackle. It's also an off shoot of the classic wet fly. Jim Leisenring and Pete Hidy developed the pattern and the presentation style that goes along with it. This fly varies from the English soft hackle in the fact that the slim body is replaced with something more robust (buggy dubbing) to create a wider profile. Leisenring and Hidy also loved hen hackle more than their English counterparts. They used it everywhere! 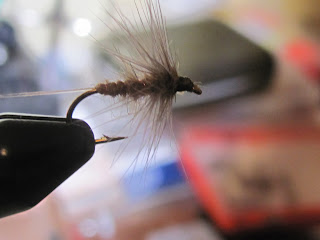 This fly is also called the "wingless wet" because the creators ditched the lifeless, stiff wing of the traditional wet with NOTHING, just turns of hen hackle to match the emerging insect. And they meant "emerging" because this fly was created to imitate the rising insect form. It was either swung in the current and allowed to come to the surface at the end of the drift with the rod then being raised and lowered to mimic the rising insect again (the famous Leisenring Lift) or fished with a short line upstream while raising the rod as the fly sweeps back to you which, by the way, was Theodore Gordon's wet fly method.

Hackle - dun hen hackle tied in at the thorax and wrapped forward. You want a "full" profile

If you feel that you can improve this pattern by putting a bead on it's head you are missing the point. Golf awaits you! 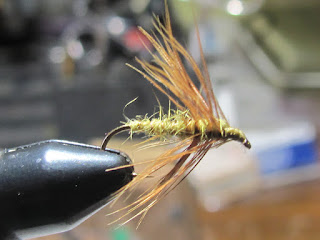 BTW, my spy in Connecticut informed me that the Farmington is LOADED with fish as this State dumped god knows how many of their gorgeous browns into the river last week. The Up Country site backs this up. Everyone is catching fish. I'll wait a month or so to hit the Campground Pool and Spare Tire. Where are those pools?? Buy the Guide to the Farmington River sold at Up Country. It is money well spent!

Posted by Millers River Flyfisher at 5:57 AM

If you feel that you can improve this pattern by putting a bead on it's head you are missing the point. Golf awaits you!

Ken , Thank you for giving us a blog full of valuable,usefull imformation and not the typical generalizing and fish count boasting BS !

I started fly fishing not too long ago and I still buy my flies. I have been trying to understand a little better the entomology part of it and I am thinking about start tying, which seems like a whole new hobbie, related but separate, from the fishing part. My question is, how much do you think a fish can tell in terms of detail? Do you tie general patterns instead of specific bugs? If I see flies for a Quill Gordon, a March Brown and a Hendrickson I can barely tell the difference between them and I wonder if I can use the fly interchangeably as the fish wont be able to tell the difference. My point is that there are more differences between the actual insects and the flies than among the flies. Any thoughts? Also, thank you for posting this kind of entries, I find them really useful.

You make me feel good. Sometimes I feel I'm crying in the wilderness! Someday we will meet!

Anonymous 2,
You said tying could be "related but separate". You are on the right track. The great Jack Garthside said that if he couldn't fly fish any longer he would still tie flies! Same with me!

I tie general patterns for fly fishing and specific patterns for my pleasure. The difference between our man made creations will come to you BUT most aquatic flies/nymphs look pretty much the same and only differ in size and profile(shape).

Keep asking questions and email me if you want!

So if I want to get this fly a little bit deeper by putting a bead on it, I should take up golf? I forgot the rules of fly fishing were so strict. Do you know where I can get a good deal on a set of used clubs?
Mike from Worcester

I was making a nod towards tradition by making the bead comment. This time proven pattern is not improved by adding tungsten to it but your line mending would need to improve if you want more depth which, by the way, is not how this fly is fished. It's an emerger pattern. Next thing will be bead headed Atlantic Salmon flies!!!

I have a set of golf clubs that haven't been used in years. Make me an offer.


"My question is, how much do you think a fish can tell in terms of detail?"

I lived and fished in Europe for quite a while, where there are some really expert fly tyers. You should see some of the detailed nymphs they tie, so realistic you think they'll bite you. BUT those super realistic patterns don't catch more fish.

I'm a slow and meticulous fly tyer, but overdoing detail is not necessary (no fish will count to see if there are two or three tail fibers). It's the general impression that is important, and that includes, as Ken rightly pointed out, size and profile (shape), and I would add, color. Sometimes color makes a big difference.

Fly tying and fly fishing go hand-in-hand. I would even dare say that tying your own flies can make you a better flyfisherman, at least, a more aware one.

I think you're right Herm. Once you have confidence in the flies you tie, I think it does make you better because you won't find yourself switching, and you'll only have flies on you that you need. Plus, it makes you more aware of stream entomology.

To anonymous 2 I would recommend Dave Hughes book trout flies. The first two chapters are gold. He writes about impressionistic verses imitative flies among other things. I think it will help out, it did for me.

Thank you all for the suggestions and comments. Hopefully, when I start tying, I'll discover that my 1st grade teacher was wrong when she said that my fine motor skills sucked.

This post got me thinking about a fly style I tied but never had the opportunity to use last season. A Jingler style fly. Craig Matthews put me onto them last time at his shop, he was starting to play with it and liked it.Pretty fly-a dry wet combo-I tied a bunch up but either left them on the desk or it wasn't a good time to try them. has anyone tried it or heard of it? Sorry to come out of left field on this...but a light went off in my head while reading this post.

Hi Ken. I really appreciate the information in your blog and check it everyday to try and learn more. I started fishing the upper section of the Millers last summer (access in South Royalston). I am eager to get back there and have been watching the flow rate. At what flow rate do you think that section will be fishable again? Thanks, -Erik 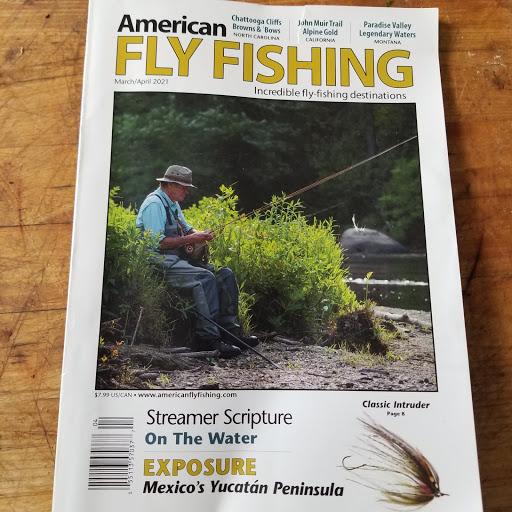 Good Days (The Wall Of Fame)

This blog is into it's 15th year of giving you the up-to-date skinny on Central Massachusetts trout fishing and has inadvertently spawned several generations of imitations, knock-offs and impostors who have either sunk without a trace or hang on with an endless loop of borrowed content. This is an original site with original content and it will remain so. Tens of thousands of monthly pageviews will attest to that as will over 2 million pageviews since day 1!!! 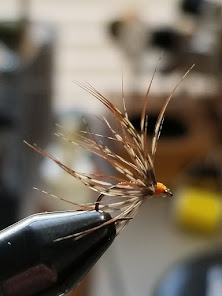 Scroll UP and click the FLY PAGE for my selection of tailwater and freestone flies. $20 minimum order. 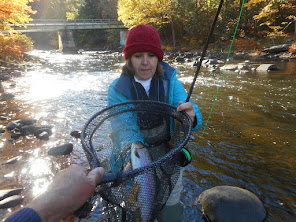 You've always wanted to try this sport but the idea of taking a two day class with a steep price to find out if you REALLY liked fly fishing just didn't seem smart. How about a three hour on-stream, one-on-one session (or 2 on 1) where you get to know the appropriate equipment and how to use it, some stream entomology (bug science), casting and fly selection. Or maybe you've been fly fishing for a while but feel you're in a slump and are doing something wrong. Time for a refresher course! The Swift is a perfect classroom and I have brought numerous new fly fishers here who ended up catching their first trout! The price is $90.00 for three hours for one person, $150 for two. You supply your waders (inexpensive hip boots usually work) and your fishing license and I supply the rest. This is a perfect class for late afternoons and evenings during the summer. ken.elmer9@gmail.com contacts me. 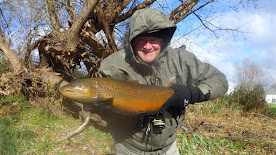 The Fly Fishers Guide To The Millers River - IT'S FREE!!!

"Your guide is excellent. The specificity of your descriptions is what sets it apart from other guides for me.
I often have felt uncertain if I am in the right spot. This won’t be the case with your guide."
I've spent over 30 seasons on this river and have gained a lot of knowledge on how this river works. It's all included in The Fly Fishers Guide To The Millers River!! With over 35 pages and over 20 photos it's the only real source of fly fishing information available on the Millers. Learn about the Thousand Acre Brook Run, The Gorge Pool, The Upper Trestle, The Kempfield Section, and many others. And now it's FREE. To order just email me at: ken.elmer9@gmail.com and I'll send it back as an attachment.
See you on the river!! Ken

You have heard of it. I have written about. It's a great way to fly fish small streams EVERYWHERE including the Swift. If you are new to fly fishing and would like to get into this unique style or if you are a conventional fly fisher but like the idea of a very minimalist approach then we should talk. Tenkara gets you on the stream with minimal expense and it is a great way for couples to share many hours on the stream with skills that are easily picked up with a few hours of instruction. My wife, totally new to fly fishing, caught trout and is hooked on Tenkara. Tenkara outfits are inexpensive compared to conventional fly tackle. An inexpensive 3 hour course will let you know if you are hooked. I think you will be hooked.
I supply the Tenkara rods, lines and the flies. For absolute beginners I will introduce you to conventional fly fishing AND the Tenkara method.
Rates - $100 for one person for 3 hours, $160 for two people.
Ken
ken.elmer9@gmail.com or 978-790-4320

Me & The EB On Chronicle

Upper Gorge Pool On The Millers - Where Browns Live 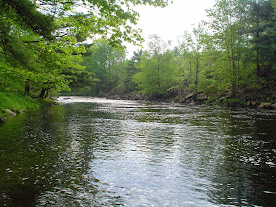 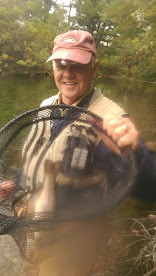